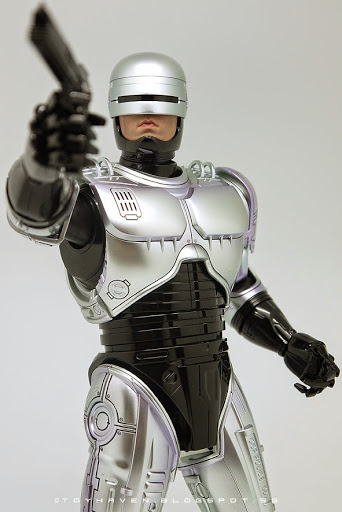 “Come quietly or there will be… trouble.”

This is my second-part review of Hot Toys Movie Masterpiece Die-cast Series MMS202D04 1/6th scale RoboCop Collectible Figure. After reviewing the box and its contents including the four different lower face sculpts as well as voice / sound effects activation in my first part review HERE, let’s take a look at another feature synonymous with RoboCop – his hidden thigh holster.

I’ve posted another 28 pictures in this Part 2 review and that’s not the last of them LOL There are more pictures to follow and I’m excited to share them. So far we have established that Hot Toys die-cast RoboCop has been painted in the wrong color 🙁 He is too much silver and the blue metallic tinge is completely missing, even though it was shown in the preview pictures (posted HERE). You can also see my toy blog post “What color was RoboCop in the original 1987 film? Let’s take a look at some screen grabs” HERE for comparison pictures between the movie RoboCop and this Hot Toys version.

Other than that, this is still a GREAT piece by Hot Toys and a work of ART in terms of the realistic sculpt (what little is seen of it), amazing details of the armor and the clever engineering to get the maximum articulation from a rather stiff, bulky and cumbersome object (let’s face it, RoboCop was not designed to be agile). 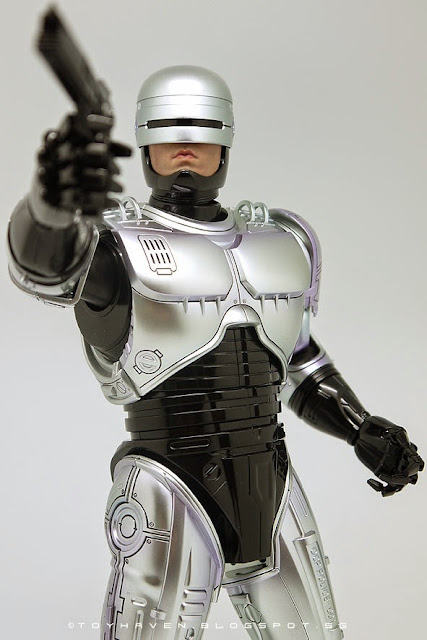 Peter Weller had hired Moni Yakim, the head of the Movement Department at Juilliard, to help create an appropriate way for him to move his body while wearing the RoboCop suit. He and Moni had envisioned RoboCop moving like a snake, dancing around and moving very elusively. The suit, however, proved to be too heavy and cumbersome. Instead, at the suggestion of Moni, it was decided that they would slow down RoboCop’s movements in order to make them more appealing and plausible. Filming stopped for three days, allowing Peter and Paul Verhoeven to discuss new movements for the suit.
Hot Toys MMS202-D04 1/6th scale die-cast RoboCop 12-inch (30 cm) Collectible Figure has stayed true to form and is undoubtably the closest thing to the real McCoy i.e. the movie RoboCop you are ever going to get. The die-cast feature gives this RoboCop a hefty feel and makes him rather heavy. The good thing is the joints are good and tight and RoboCop doesn’t fall over easily. It’s a very nice redo except for the paint job and I can’t wait to add Battle Damaged RoboCop with the new head sculpt showing his full face (RoboCop unmasked) & Police Officer Alex Murphy (Peter Weller) collectible figures to this. Check out the preview pictures HERE. 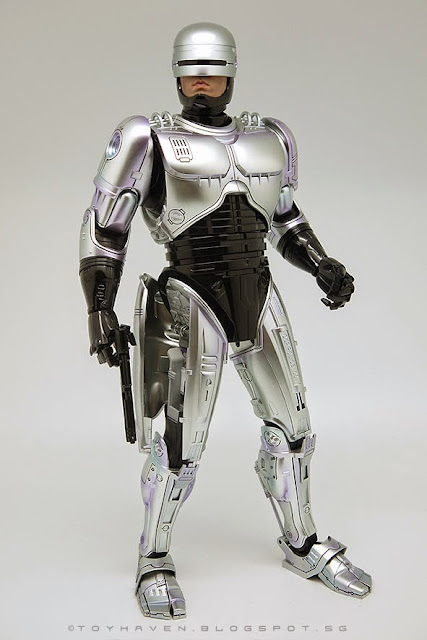 In the films, the gun holster itself was a standalone piece that was not integrated into the suit. Off-screen technicians would operate the device on cue by pulling cables that would force the holster to open up and allow the gun to be placed inside. The clever editing did the rest. Hot Toys die-cast RoboCop right thigh opens just like the movie version to reveal the holster for his gun. That has always been one of the cool things about RoboCop. The newer RoboCop (2014 reboot version) upped the ante by having two thigh holsters – check out my review of the Square Enix Play Arts Kai 2014 RoboCop version 1.0 posted HERE to see the double holsters. 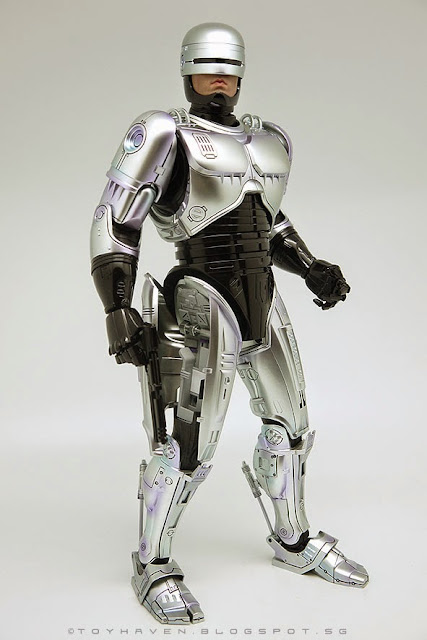 The main weapon used by RoboCop (Peter Weller) is the “Auto 9”. It is a Beretta 93R machine pistol which was heavily modified for the film, featuring a longer barrel with an enormous compensator / flash hider shaped like a casket, plastic grips, and a taller rear sight to match the raised front sight. Typically, RoboCop fires this weapon in 3-round burst mode. The fictional stats of the weapon claim it has an implausibly huge 50-round magazine. 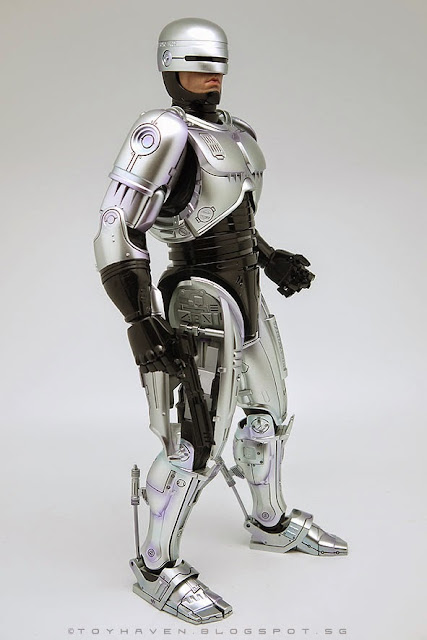 The original gun for RoboCop was a Desert Eagle, but this was deemed too small. A Beretta 93R was heavily modified by Ray Williams of Freshour Machine, Texas City, Texas, who extended the gun barrel to make it look bigger and more proportional to RoboCop’s hand. 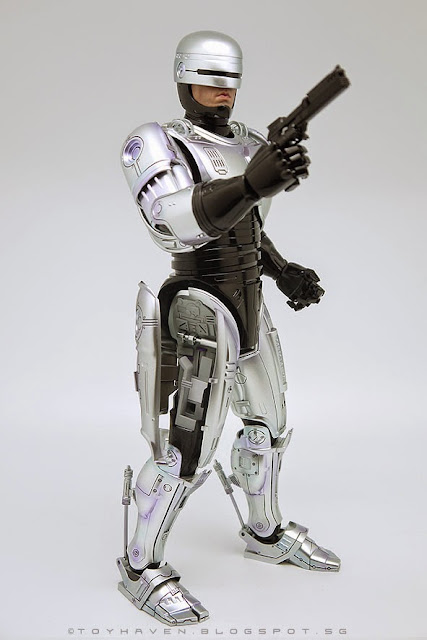 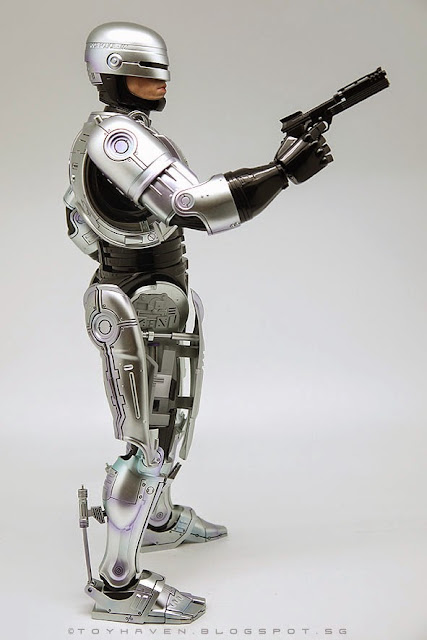 Scroll down to see the turnaround views 🙂 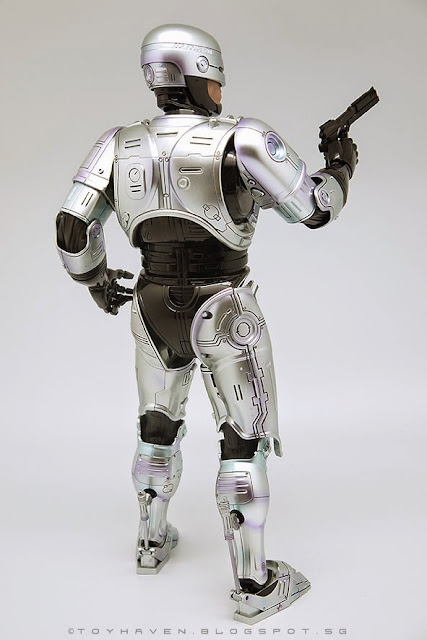 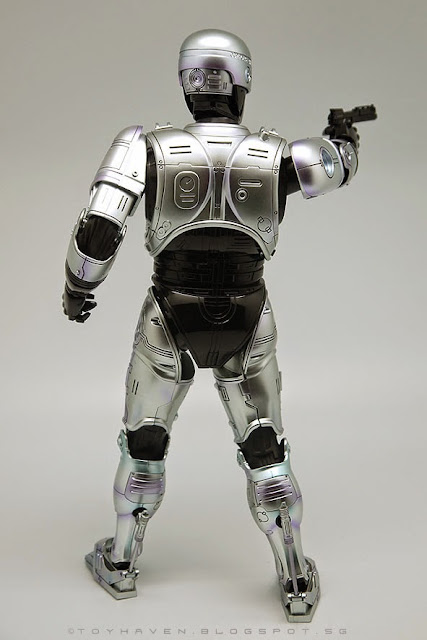 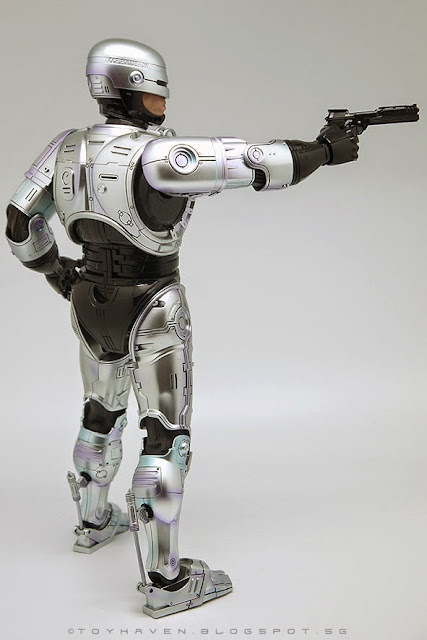 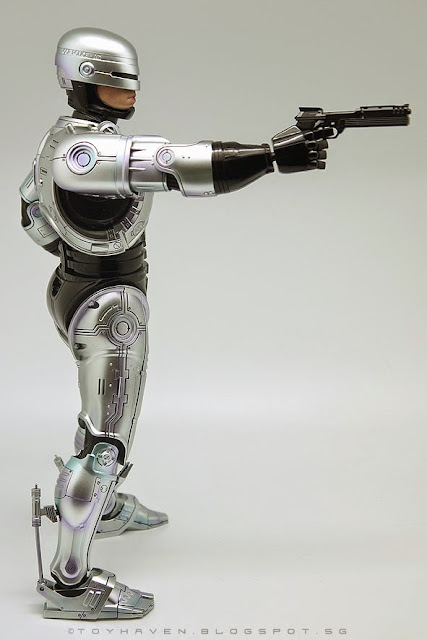 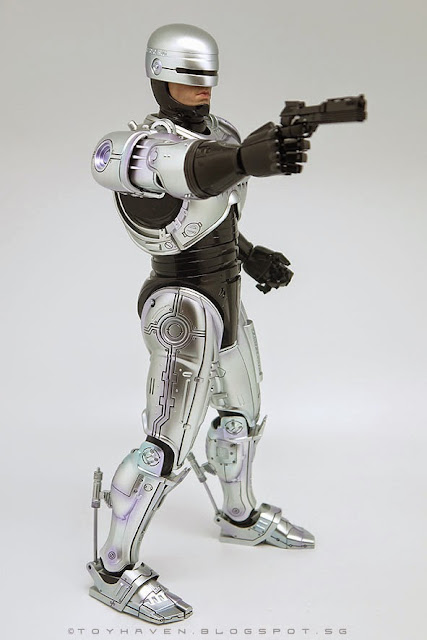 “Dead or alive, you are coming with me.” 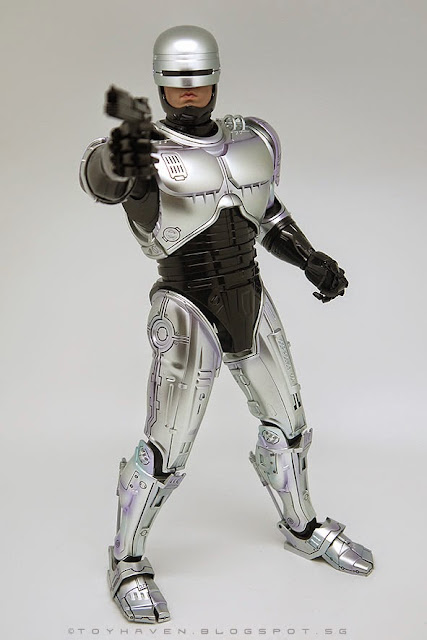 It’s not so easy to get Hot Toys MMS202-D04 1/6th scale die-cast RoboCop 12-inch (30 cm) Collectible Figure to hold his gun properly. The articulated fingers could hardly grip the pistol and it takes some effort to get it in place. It would be almost impossible for RoboCop to hold the die-cast gun that is included as it will be too heavy. Hot Toys also advises against doing it in the User Guide. 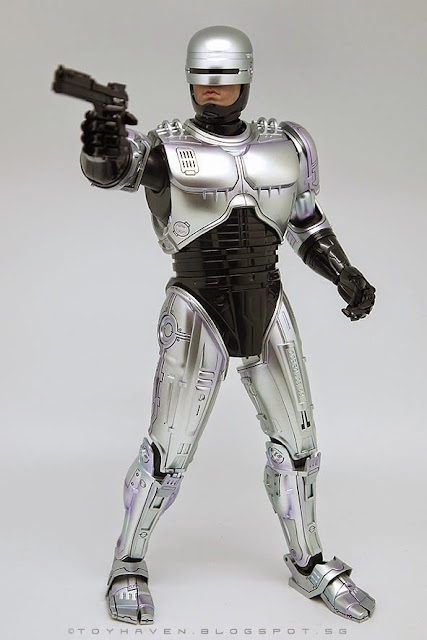 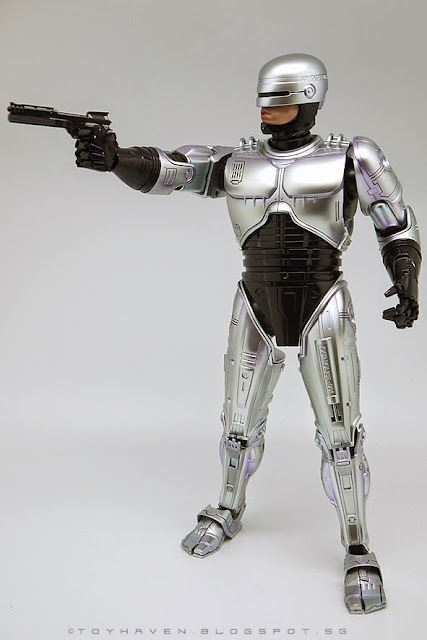 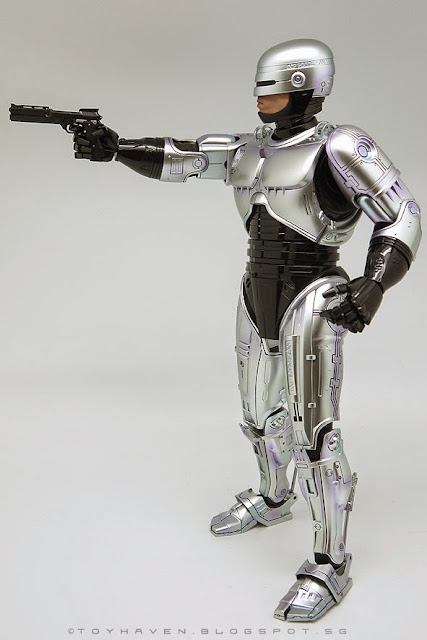 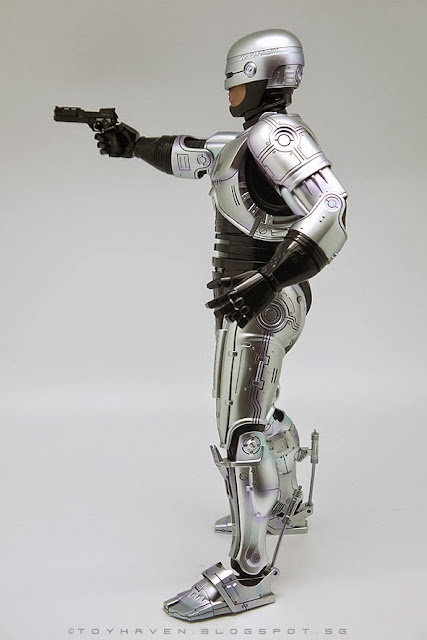 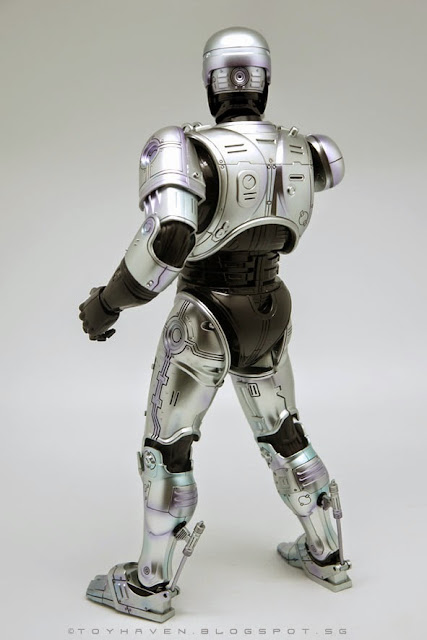 Some close-up shots of Hot Toys die-cast RoboCop with his “Auto 9”. 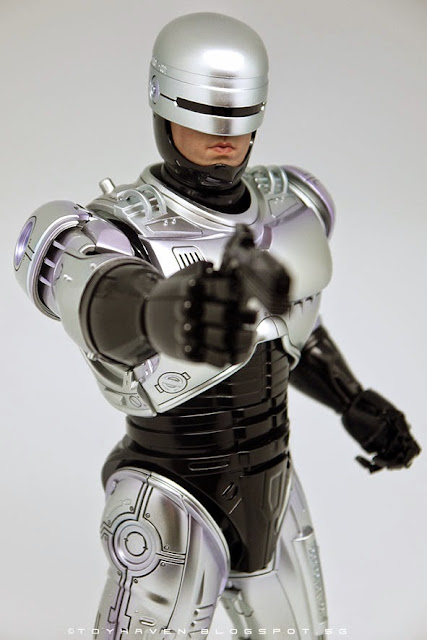 The plastic version of the “Auto 9” has a removable magazine and movable slide (articulated barrel) – shown in my previous post HERE. It has more details and paintwork than the die-cast version which is just painted black. 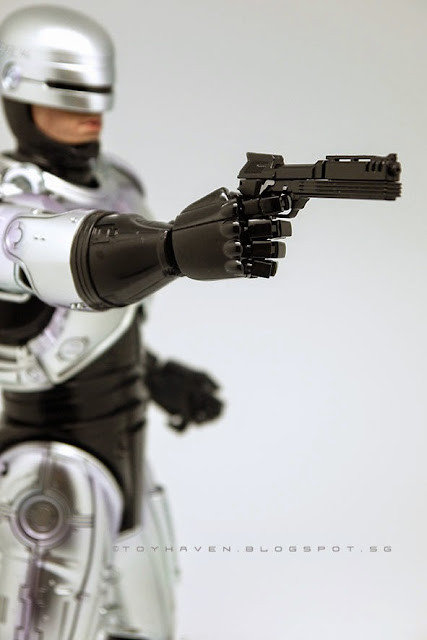 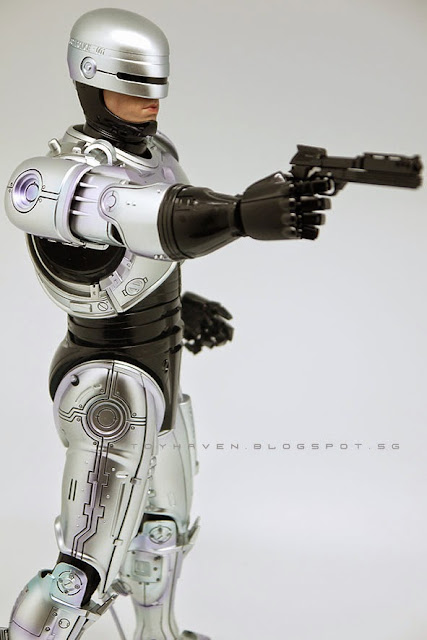 Check out the nice details of RoboCop’s legs. The attention to detail is amazing! 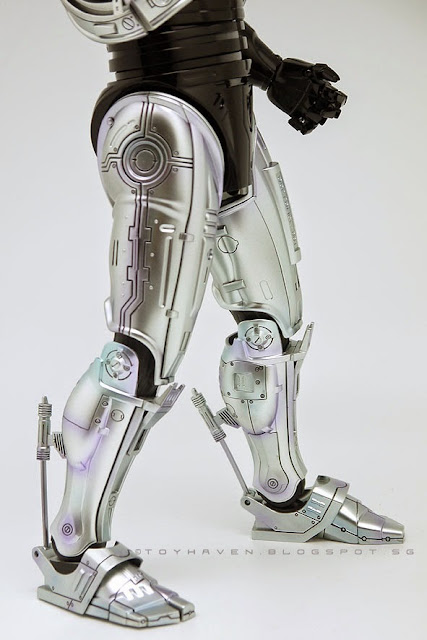 Scroll down to see close-up views of how the thigh armor opens to reveal the hidden holster where RoboCop stores his gun. 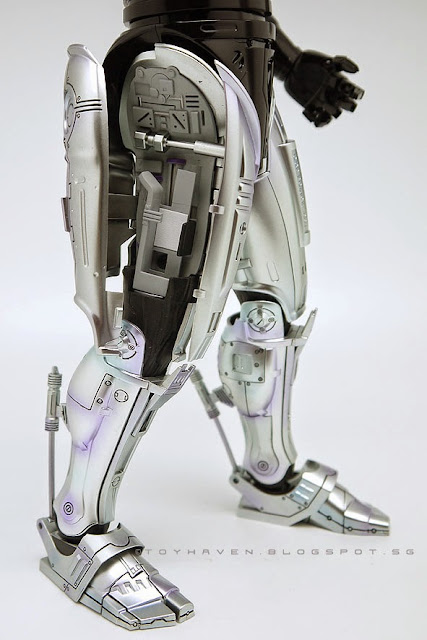 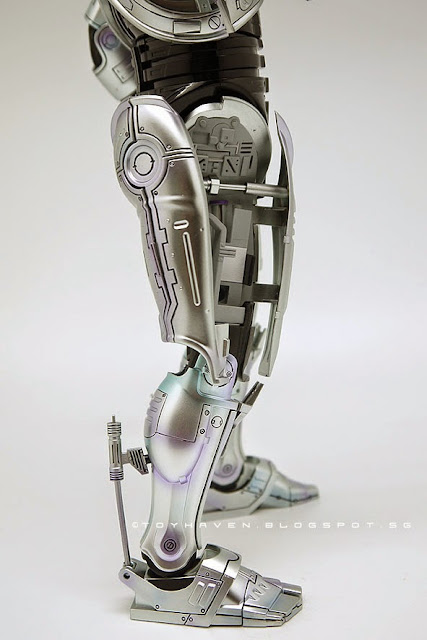 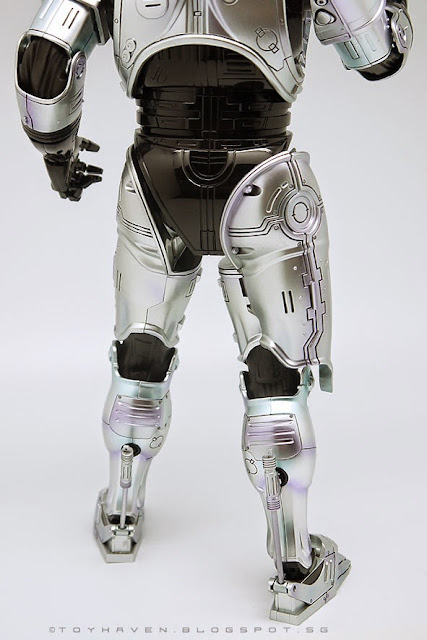 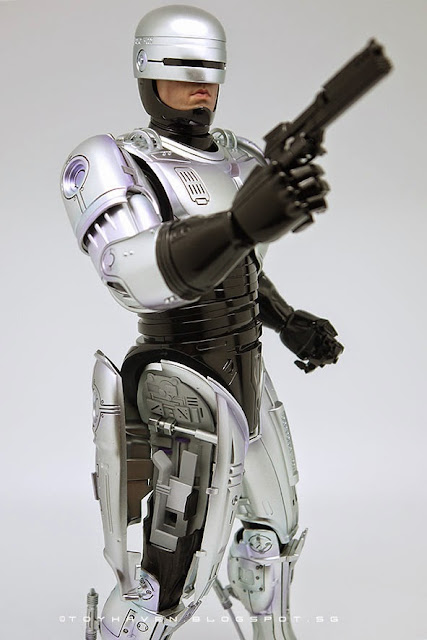 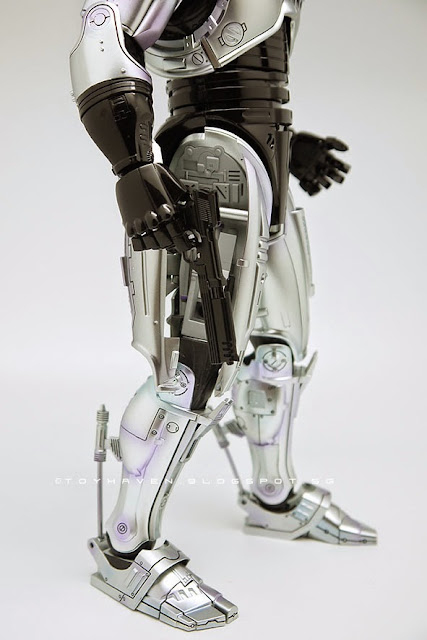 The picture below shows the normal version of RoboCop’s gun in the holster. The next picture shows the die-cast version of the “Auto 9” stored in RoboCop’s thigh holster. 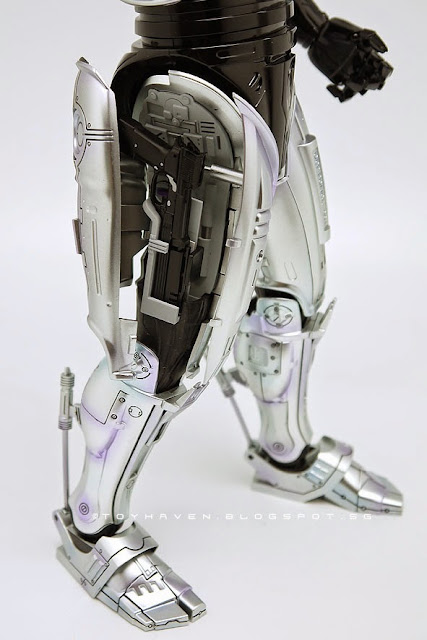 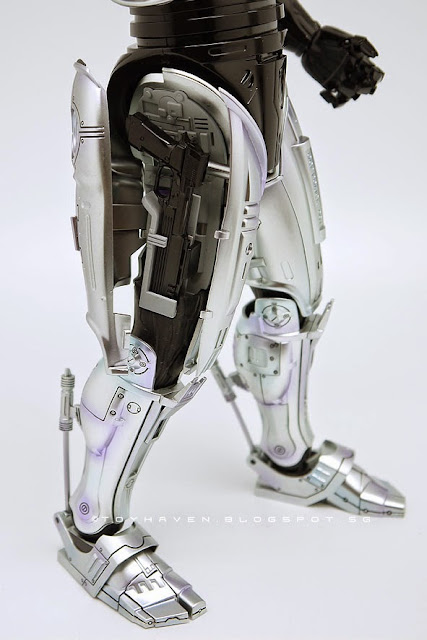 NEXT: Battle Damaged RoboCop with Barrett M82 (it was used as the “Cobra Assault Cannon” in the film)!