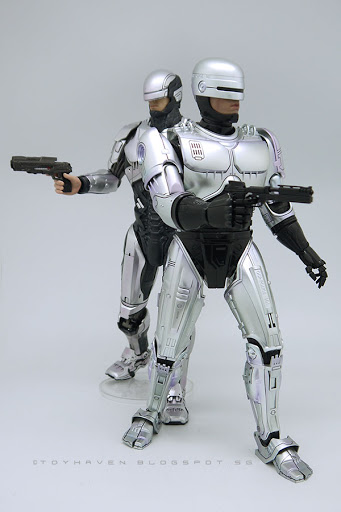 “Dead or alive, you’re coming with me.”

What’s better than having two different 1:6 scale RoboCops, one from the original 1987 film and the other from the 2014 re-boot? Put them together for pictures of course! Pictured below and for the rest of this toy blog post are the two recently released and most current RoboCop 12-inch figures, the ThreeZero 1/6th scale 2014 RoboCop 1.0 12.5-inch / 32cm tall collectible figure and Hot Toys MMS202-D04 1/6th scale Die-cast RoboCop 30cm tall Collectible Figure. Hot Toys had previously produced and released at least three versions of RocoCop (MMS010 – action figure review posted HERE, MMS026 and MMS032 – pictures HERE) and two versions of ED209 (MMS012 – reviewed HERE and MMS025) but that was a long time ago and standards have improved a lot since then, hence the release of the die-cast RoboCop (pictured below and reviewed HERE, HERE and HERE) plus the battle-damaged RoboCop with Alex Murphy two-figure set (reviewed HERE, HERE, HERE and HERE). Comparison pictures also can be seen HERE and HERE. 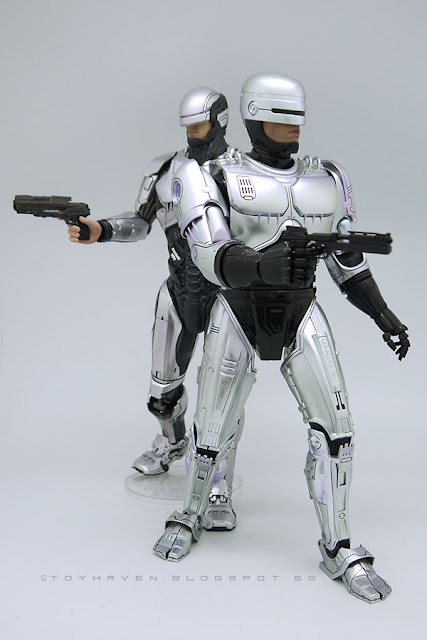 2014 RoboCop director José Padilha avoids direct comparisons between his RoboCop and Paul Verhoeven’s 1987 film – attempting to honor the original by forging a significantly different direction for the reboot. Still, longtime fans will without question notice a few knowing nods to the 1987 film. RoboCop starts in the traditional silver / grey suit until OmniCorp CEO Raymond Sellars (Michael Keaton) decides an all-black “tactical” version would make for a better “product.” After the final battle, RoboCop returns to the fan-favorite silver / grey design. And that’s why I got the ThreeZero 1/6th scale 2014 RoboCop 1.0 collectible figure as I much prefer the silver and black color scheme. 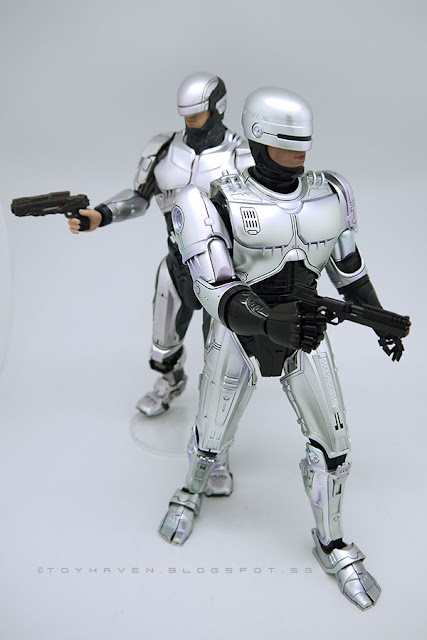 In the original 1987 film, in addition to super strength and durability, one of RoboCop’s most iconic features was his gun holster – a mechanized compartment inside his right thigh that opened to reveal a single modified Beretta 93R “Auto 9.” The machine pistol was heavily altered for RoboCop (with a longer barrel as well as a reported 50-round magazine) – fired in three-round bursts. The 2014 reboot RoboCop had two internal thigh holsters, and takes advantage of different firearms depending on the situation – including a custom Beretta Pistol (NI-408) that fired non-lethal (50,000 Volt) and lethal (200,000 Volt) XREP taser cartridges, a heavily modified (and fictional) .50 caliber RoboCop SMG, as well as a Heckler & Koch MP7A1 submachine gun. 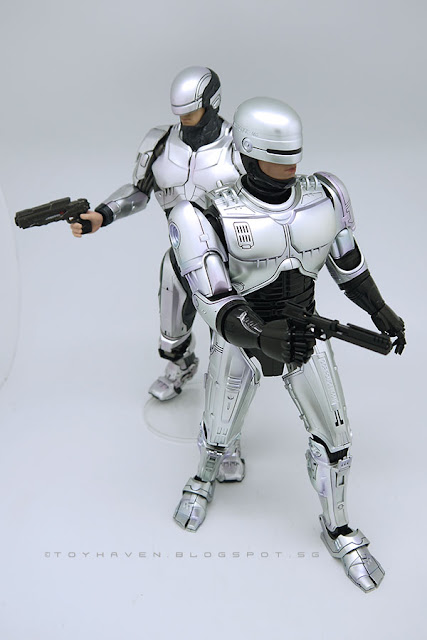 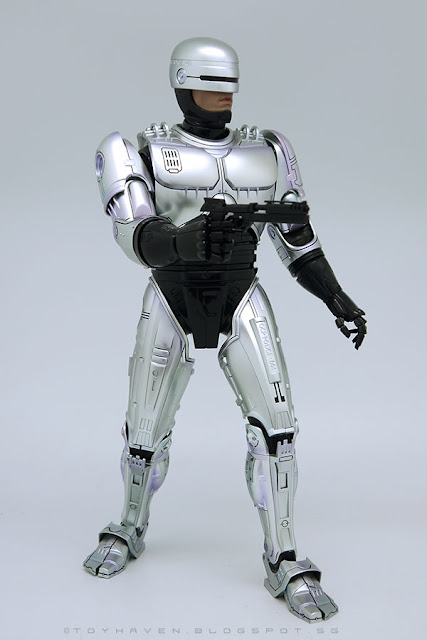 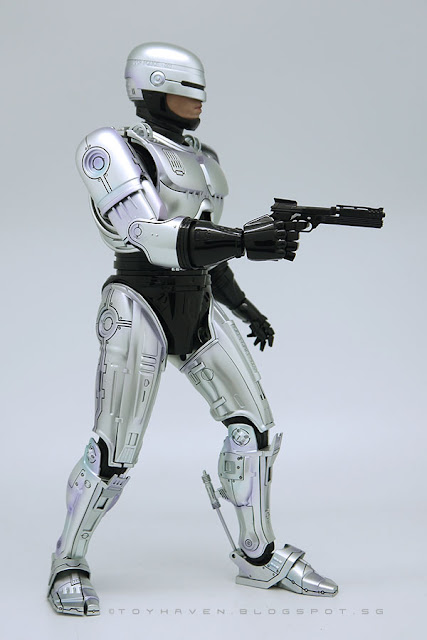 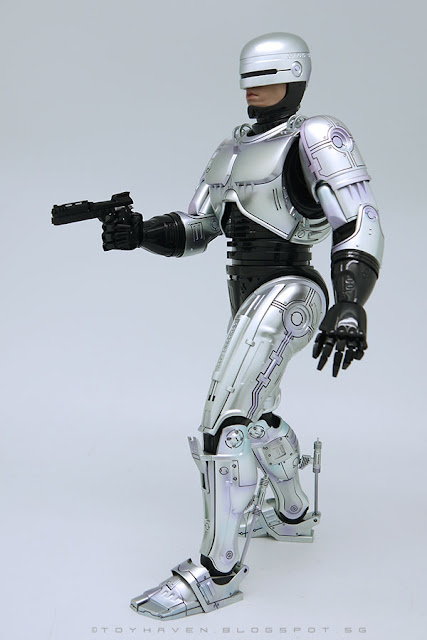 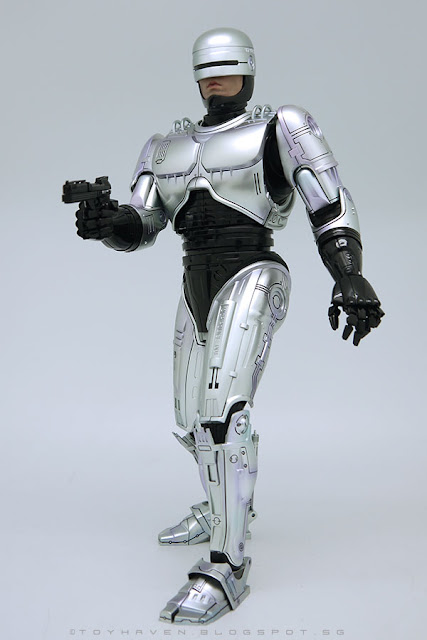 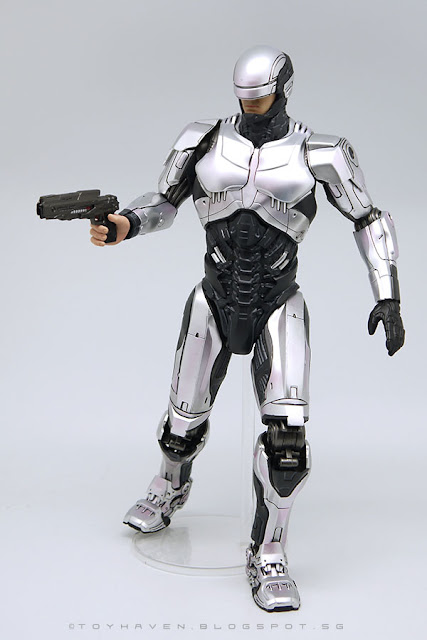 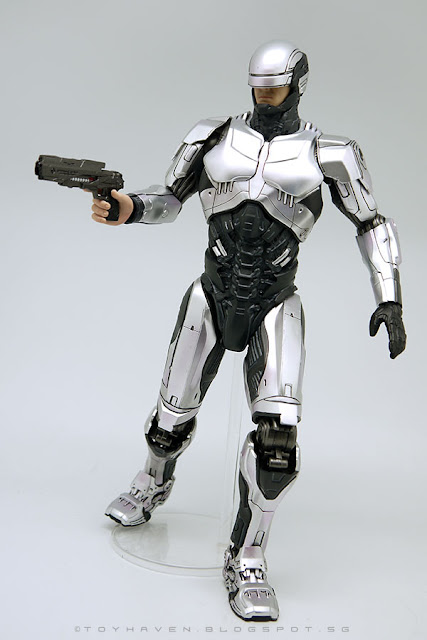 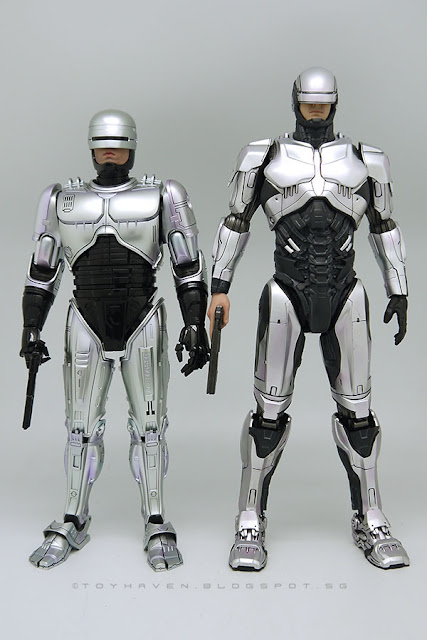 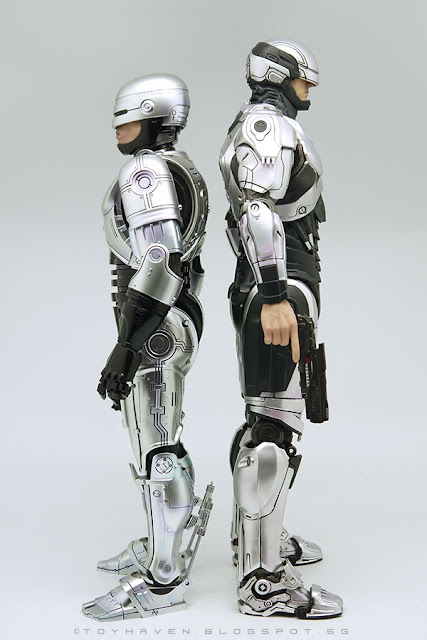 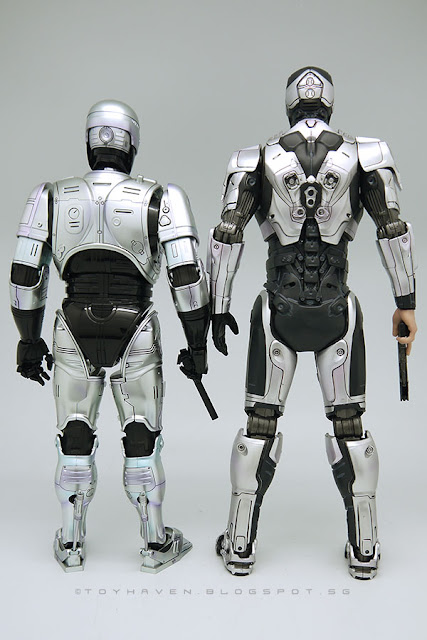