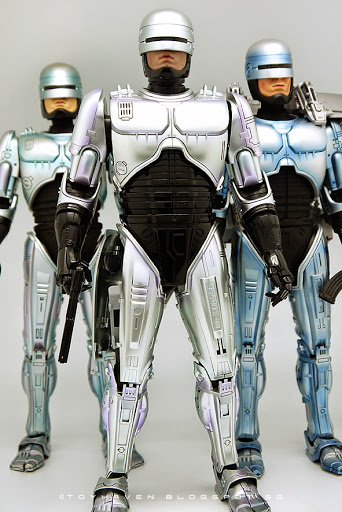 Here it is! Three different Hot Toys 1/6th scale RoboCop 12-inch collectible figures all in one place. It’s good to see how far the standards of this 1:6 scale modeling hobby (a.k.a. Playscale Miniaturism) have come in terms of sculpting and the production of 12-inch action figures. Since Hot Toys has been leading the way in innovation and design, we can also see how much they have improved over the years. Standing front and center is the latest Hot Toys released die-cast RoboCop collectible figure (MMS202D04). Behind him on the left of the picture is the original (first released) Hot Toys MMS010 RoboCop and on the right of the picture is the Hot Toys MMS032 RoboCop 3 figure with flight pack.

One of the first things you will notice is the difference in the paint application. All three are painted differently. I think Hot Toys got the colors closer to the movie version RoboCop the first time (i.e. MMS010). We also know that RoboCop got more blue by the third film, hence the colors painted on RoboCop 3. The other most obvious difference is the lower face sculpts since RoboCop doesn’t really show much of his face when he’s wearing his helmet. The next RoboCop to be released by Hot Toys will be the Hot Toys 1/6 RoboCop (Battle Damaged Version) & Alex Murphy Collectible Figures Set (previewed HERE) and that RoboCop figure will finally show the full face as seen in the ending scenes of the film. 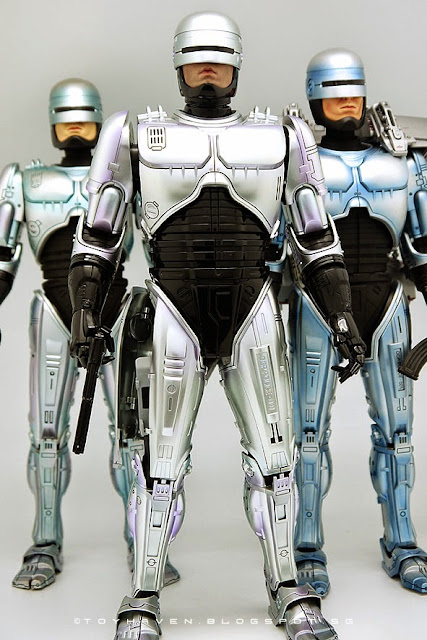 Besides the improvement of the sculpts, thanks in part to the sculptors who have turned their hobby into a passion in order for us collectors to be able to own such realistic masterpieces, the engineering of toys and action figures has also brought the 12-inch collectible market to a whole different level. These collectible figures are now so well produced that they are truly of museum quality and are fit to be put up for display in any museum as a memorabilia or showcase of that particular movie genre. People don’t call them toys anymore. They are true 1:6 scale representations of the real McCoy and as the name states – Movie Masterpieces. 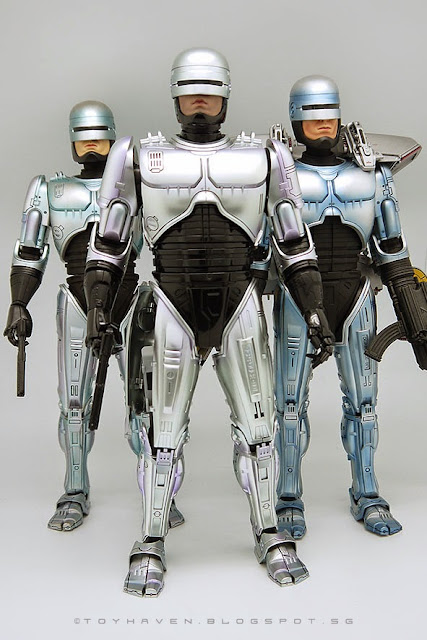 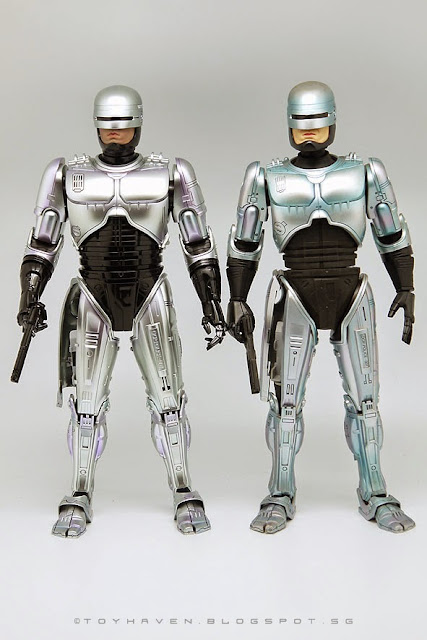 Always felt that the MMS010 RoboCop head was too big and oversized for the body. But back then, there were no comparisons to be made and that was the best there was. Check out the neck joint. We were able to accept that kind of standard then. Nowadays, the internet will be flooded with trolls bitching and complaining if they even caught a whiff of it. 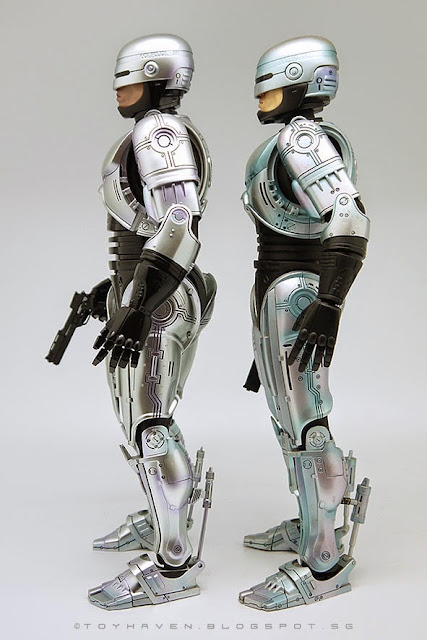 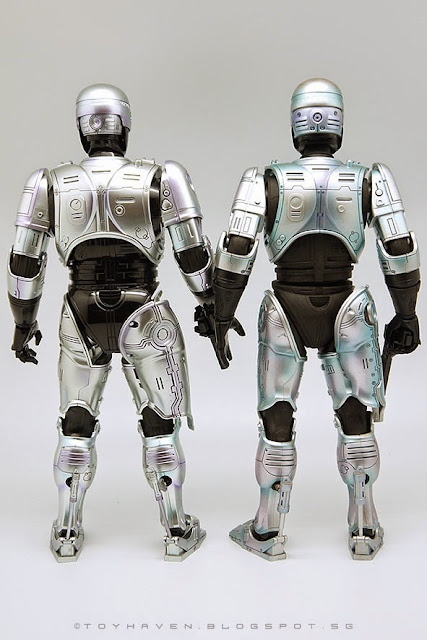 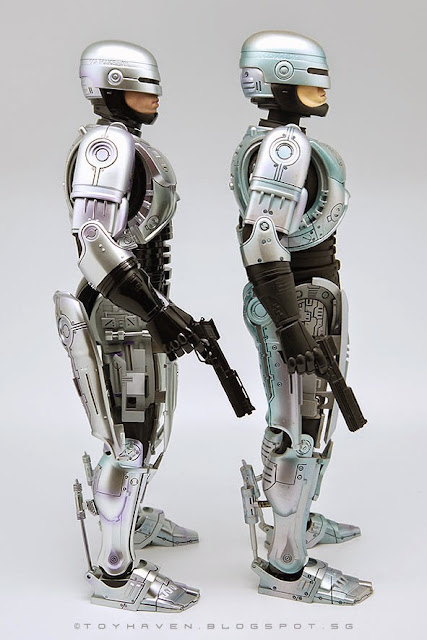 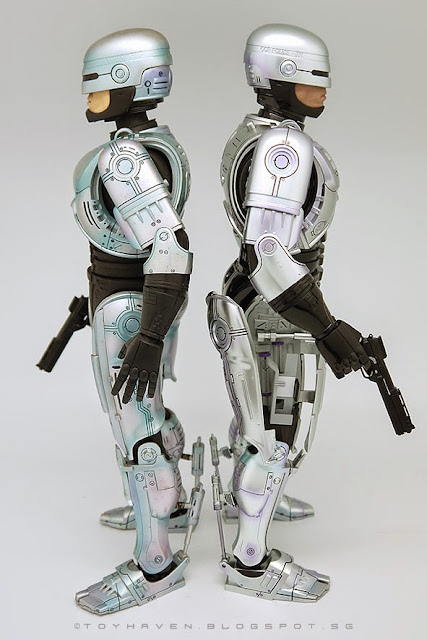 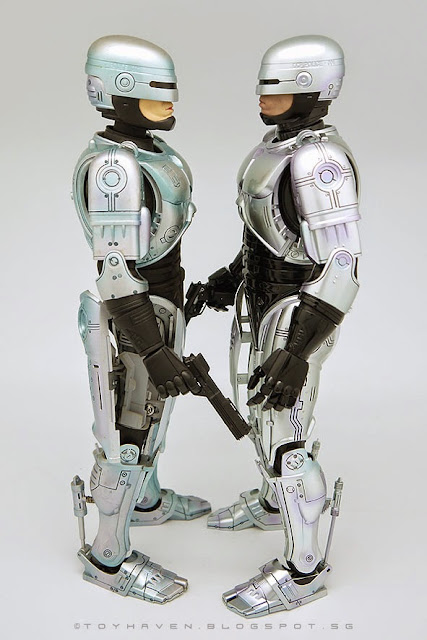 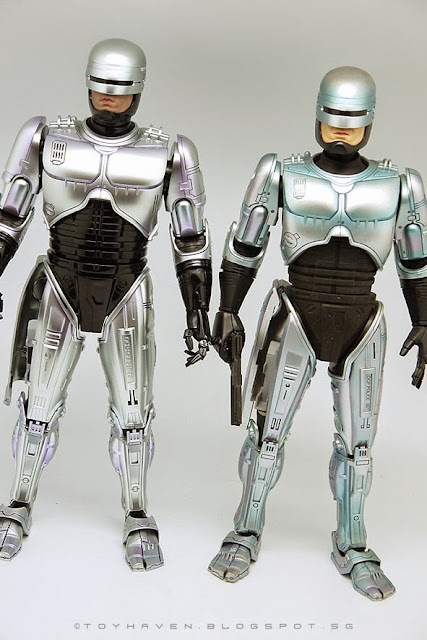 Clearly the sculpting standard wasn’t quite what it is today. But hey, we all have to start somewhere. Nothing happens overnight. True art takes time. 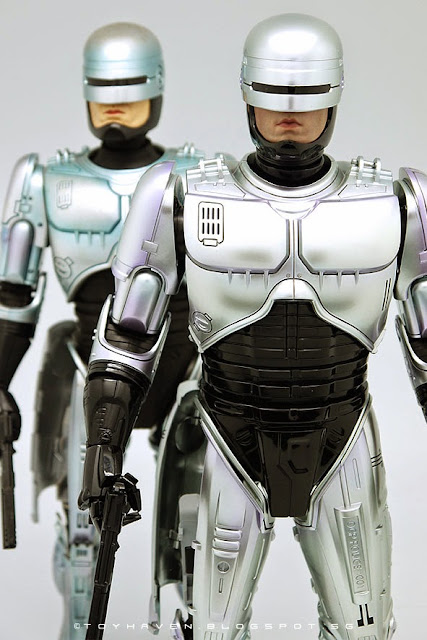 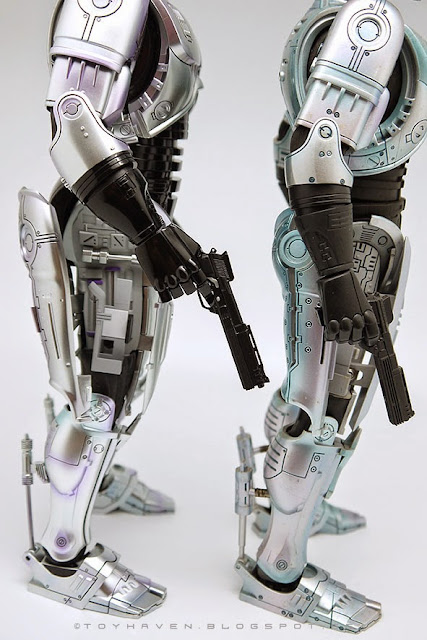 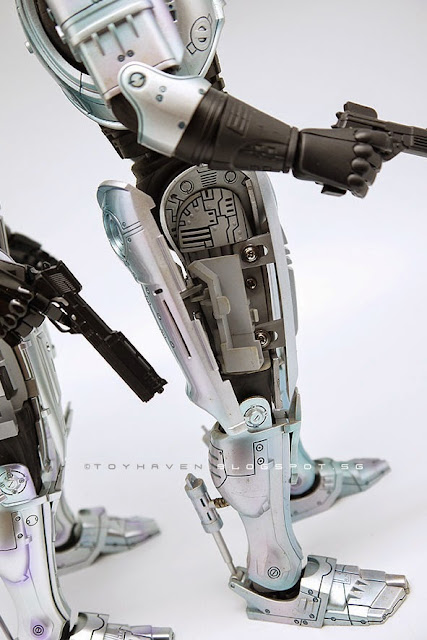 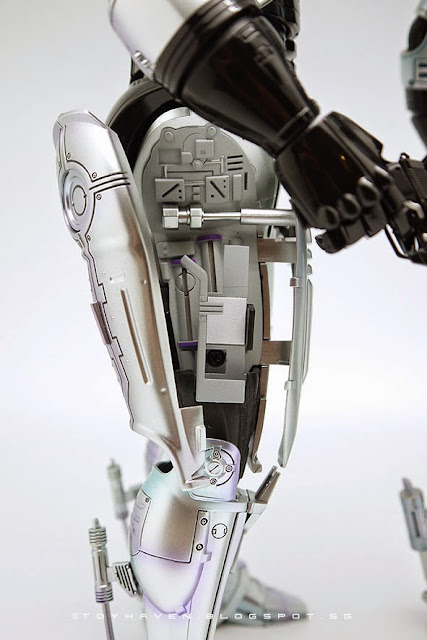 How about comparison pictures of Hot Toys MMS202-D04 die-cast RoboCop with Hot Toys MMS032 RoboCop 3 collectible figure with flight pack? Check them out below. 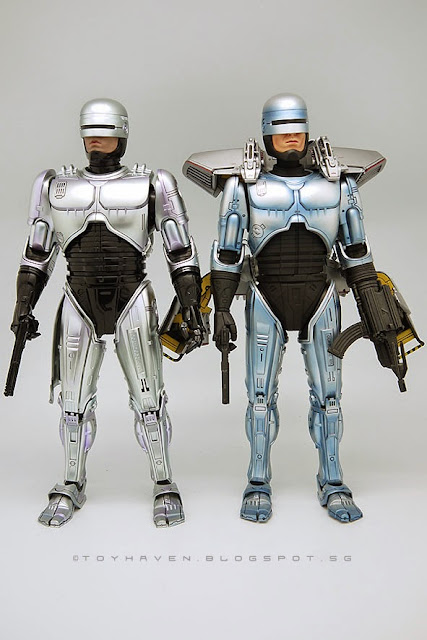 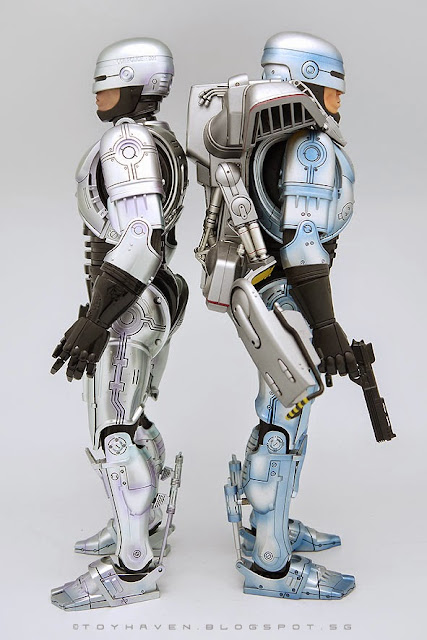 The Hot Toys 1/6 scale RoboCop flight pack is pretty neat, even by today’s standards. Then again, we really don’t have any updated versions to compare with. More pictures of the 1:6 scale RoboCop 3 flight pack / jetpack can be seen on my toy blog post HERE 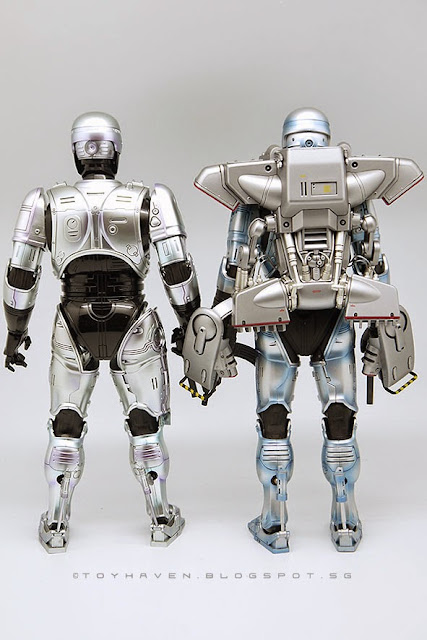 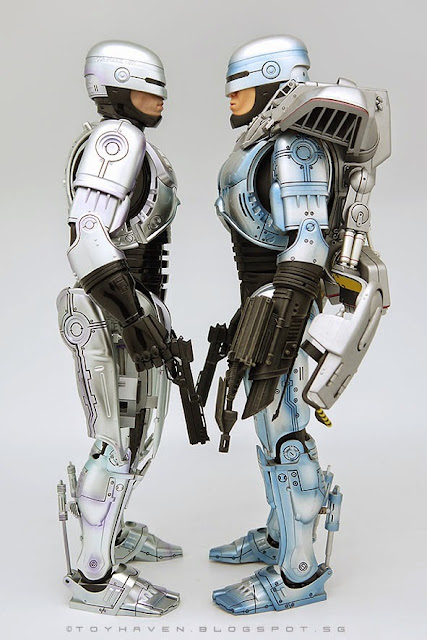 Hot Toys MMS032 RoboCop 3 12-inch collectible figure also came with a multipurpose pod that replaces his lower left arm. It contains a machine gun, a grenade launcher and a flamethrower. The machine gun is actually Calico 950A mounted on its side with a barrel extension and futuristic dressings. 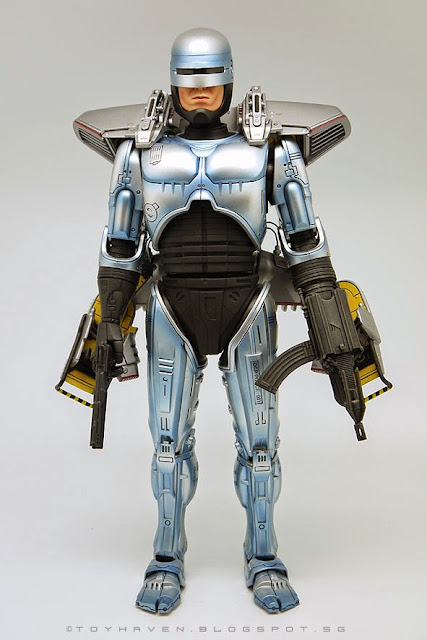 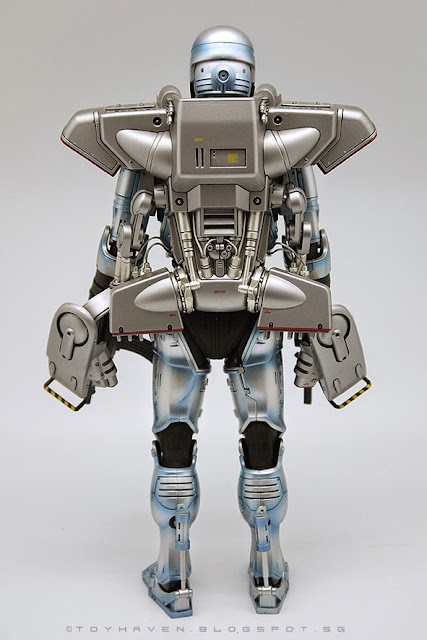